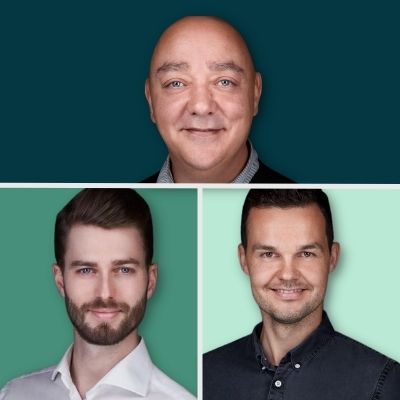 Gøran Hansen
Gøran is our CTO at Dolittle. He has worked with development for more than two decades. In his last position, Gøran was CTO for product development at A-Media with responsibility for several development teams. He has also been involved in making several popular mobile apps. One of them is Wordfeud, a game with millions of users. In the period 2010 to 2014, Gøran received the honorary title of «Microsoft Regional Director», reserved for a few hand-picked technology talents, who act as an advisory board for Microsoft’s own managers. LinkedIn

Jakob Høgenes Currently Jakob is Lead Platform Engineer at Dolittle.
He holds a Master’s degree in Engineering Cybernetics (robotics) from 2015.
Prior to Dolittle he worked as a researcher on model-based software engineering, focusing on IoT and CPS applications. LinkedIn

Pedro Dias
Pedro is currently Senior Tech Lead at Dolittle. He is a passionate technologist and a firm believer in agile methodologies and established architectural patterns. He holds a bachelor’s degree in computer science and has over 30 years of experience in the software industry. He was the lead back-end architect behind tv.nrk.no. Before joining Dolittle he spent the latest seven years at Microsoft where he worked as a software development engineer and technology evangelist for large customers around the globe. LinkedIn